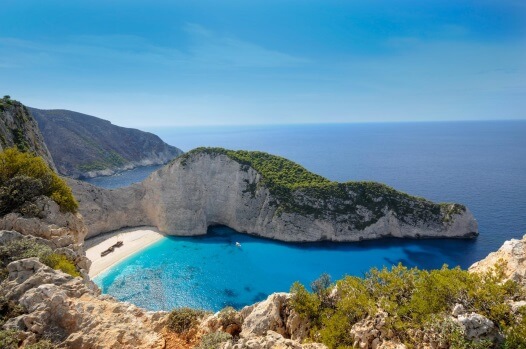 The southmost island of the Ionian Sea, with more than 7,000 species of flowers, called by the Venetians who ruled Zakynthos from 1484 to 1797 "the Flower of the East" is still one of the lushest and most-loved Greek islands, with green hillsides covered with flowers in spring and early summer, cliffs dropping to dazzling turquoise waters, and some of the country´s best beaches.

Zakynthos is the third largest island of the Ionian Sea, after Corfu and Kefaloniá, and internationally is known as “Zante”.

Since prehistoric times, Zakynthos has been glorious thanks to its geographical position and its overabundant resources. In 1185 it came beneath Frank tenure and in 1479 beneath Ottoman rule that lasted for few years years. In 1484 Zakynthos entered its flourishing once it came beneath Venetian Rule. Native design was marked by the Venetian influence i.e. bell towers become independent from the most church buildings.

The Venetian architectural influence has left its stamp on the island despite the damage sustained by an earthquake in 1953 and the ensuing fire. A significant number of historical churches and buildings burned to the ground together with the treasures of these buildings. Following the earthquake damage, the island was rebuilt with strict anti-seismic specifications, respecting to a relatively high percent the town’s former architectural structure. The whole island was reconstructed with a tension to retain its historical Venetial feel, with porticoed pathways, a spacious main piazza (such as Solomos square and San Marco square) and a scattering of elegant old buildings

The hill above the town, called Bohali, hosts a ruined Venetian castle which overlooks the Ionian Sea.

Zakynthos island can be explored either through a car, or with a private tour Van service, even with motorbikes. However, the best solution for a tour of the major resorts that certainly doesn´t fail to entertain the traveler is through a private tour with a Van with a professional driver who will be inspired by the groups preferences and will guide you to the spots for your unique profile.

Dally flights connect Athens with Zakynthos' International Airport, which is just six kilometres away from Zakynthos Town, whereas international charter flights connect the Island with varied European cities. Furthermore, there are regular ferries running from Killini port and an immediate boat link to European country 3 times per week throughout the summer months. There also are ferry connections with the neighbor island of Kefalonia from the port of Saint Nicholas at the north part of the island.

Zakynthos International Airport “Dionysios Solomos” (credentials “ZTH”) welcomes flights from all over Europe between April to October. From October until April, the majority of businesses which are related to the tourism industry hibernate and new plans for additional services, new accommodations are now getting busy in order to be ready before the start of the new season. Furthermore, Zakynthos is very well known for its significant participation in the industry of agriculture. This period, is the one that farmers and big part of the island’s active workforce undertakes farming related projects.

Due to COVID-19 outbreak, Palazzo Di P has amended its cancellation policy in order to provide maximum flexibility to its guests. Even for the non refundable rate, 100% refund will be applied for :
a) Flight Restrictions/Cancellations and
b) Country of origin and/or Country of destination (Zakynthos Island "ZTH" - Greece) restrictions, within or less than 7 days prior to arrival, which ban's arrivals (the requirement of performing rapid tests or PCR tests andor submitting PLF forms "passenger location form" or any other declaration for guests trip, is not considered as a restriction).